The Library of Sosaria was started on the Great Lakes shard in BY 415 (April 25th, 2007) by Martyna Z'muir. The first incarnation was created to the east of Skara Brae in the town of Whispering Winds in a simple two-story plaster home. The Library quickly outgrew that location, necessitating the move to its current location in the hamlet of Nameless Rune near Yew - just south of the moongate. (72* 26'N 39* 18'W)

The Library has many fine patrons who have freely given their collections to the peoples of Sosaria. Those include: Lord DaKaren and the Order of the Etheral Ankh, Lady Silverbrook of Magincia, Lady Kazola of Kazola’s Treetop Keg and Winery in Yew, Redlow DeSule (formerly Redlow Winski) of Whispering Winds, Lord Mordain of the Temple of Mondain, Lord Velturus Viaxus of Qu’ellar d’Viaxus, the High Council of Britannia, the township of Newcastle, and Lords Galen Knighthawke and Thanatos Angelos of the Legacy of the Fallen.

The Library of Sosaria has the foremost collection of ancient manuscripts, puzzling tomes, and modern works of literature on Great Lakes. This ethereal version was created as a bridge between the shards to bring the wealth of knowledge to everyone. 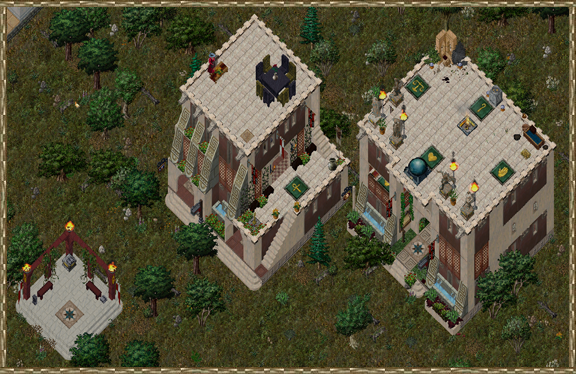