From Library of Sosaria
Jump to: navigation, search 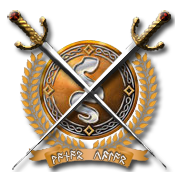 The Volunteer Royal Guard (VRG) reformed shortly after Casca's ascension to the throne. One Tomas Savos, an academic with no practical military experience, was named Captain of the Guard. Sadly, his time as Captain was short lived and ended in disgrace.

After Dawn ascended to the throne as queen, she named Christine Keel as Commander of the renamed Royal Britannian Guard. Commander Keel stayed with the Guard until shortly after the death of her mother, Maggie the Red.

Gwendolyn Kincade became the next Commander during a resurgence of The Followers of Armageddon.

The Misdeeds of Hercules (2010) (Arc Completed)

Compliments the BRS missions - The Void Queen:
To steal a Queen (2011) (Arc Completed)

Back to Modern EM Events